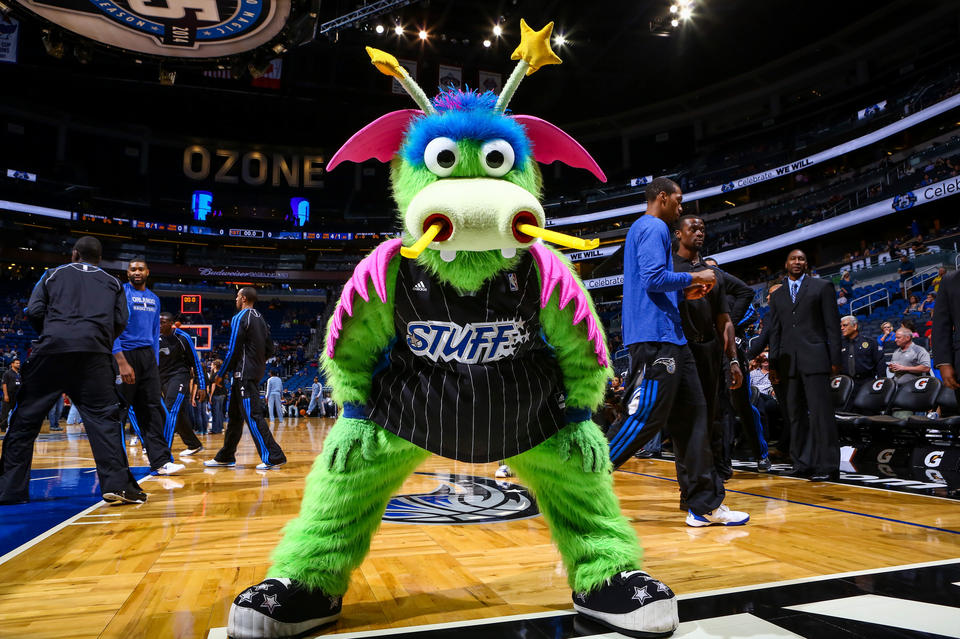 The Orlando Magic have an instantly recognizable and an odd mascot. He goes by the name of Stuff the Magic Dragon.

Why “Stuff”? That’s not too creative, you might think. Well, to “stuff” means to slam dunk, and besides the whole name is a play on Puff, the Magic Dragon, which is an old folk song by Peter, Paul and Mary.

Stuff the Magic Dragon has been so popular with the Orlando Magic that they haven’t retired him ever since the team joined the NBA in the 1989-1990 season. Before they settled on the dragon, the management discounted several ideas, including a wizard, rabbit and a magic bean.

Like basketball in Orlando, the mascot itself has Philly roots. His introduction is also a story to behold. He was inaugurated in a huge egg on Church Street in Orlando. The person behind the mask was Dave Raymond, known as the Phillie Phanatic.

His looks are rather weird, and some dislike him for it. He’s a green dragon with a blue unibrow, and a glorious pink mane that goes well with his pink shoes. Of course, he breathes “fire” and two party blowers are a way of showing that.

He usually appears in a white jersey, but his fur is prone to change colors. In playoffs, Stuff turns blue! During the playoffs, he also likes to rappel down a bungee cord. Dangerous and exciting!

His appearances on The Tonight Show with Jimmy Fallon, on TMZ and on SportsCenter only serve as a testament to his popularity. He was also named NBA Mascot of the Year in 2016, mainly thanks to his backflip off a ladder into an inflatable hoop.

Stuff’s crazy antics are well known. Pre-game, he loves to toss shirts around for his fans to catch. His standard repertoire of trampoline dunks and break dancing doesn’t leave anyone indifferent!

See him in action:

Other NBA mascots also love him, and they all come to the Amway Arena to celebrate his birthday. Of course, the party gets rowdy and wild with mascots eager to show their fans what they’re capable of!

Along with his birthdays, the Amway Arena also hosts the “Celebrity Mascot Games”, where mascots compete in various disciplines. It’s all for charity – more precisely, for the “New Hope for Kids” organization.

But it’s not all just show. He makes frequent appearances all over schools in Central Florida, where he performs his THREEE Point Play. It is an educational program that aims to teach children to eat right, exercise and understand the importance of education.

Stuff has been entertaining the Orlando fans for over 20 years, and he’s doing a mighty good job at it. A gymnast, a philanthropist and a dragon – all in one package. That’s really not easy to find!