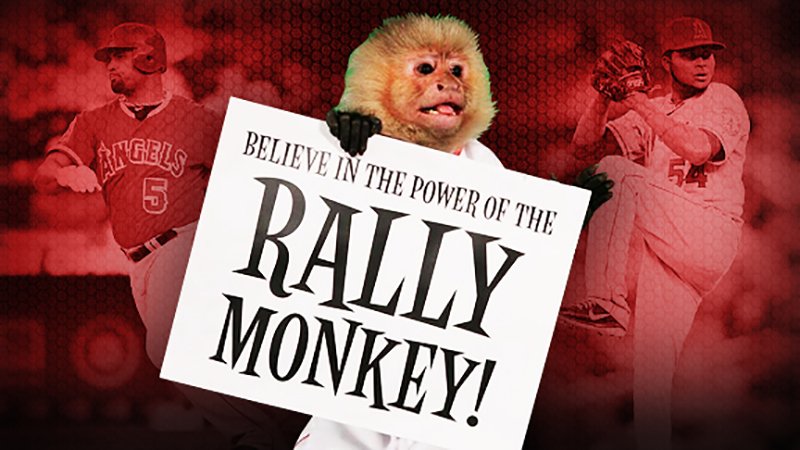 The team from the City of Angels used to have two mascots in the 1990s, Scoop and Clutch. These mascots were two bears in Angels’ uniforms. They went the whole hog and also had halos and wings. Over time, they appeared less often and gradually fell out of favor.

However, in the new millennium, another mascot appeared. His name was the Rally Monkey. He made his first debut on June 6, 2000, and quickly became a cultural icon. Technically, he is not 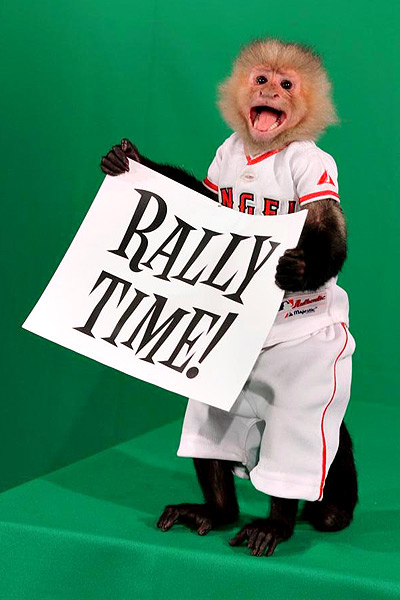 the official mascot of the team even to this date!

But why a monkey? Well, there’s a story to that. On June 6, 2000, the Angels were playing against the San Francisco Giants, and they were losing 5-4 in the ninth inning. The video board operators, Jaysen Humes and Dean Fraulino then showed a clip from the 1994 film featuring Jim Carrey, Ace Ventura: The Pet Detective. The clip featured a monkey jumping around, and the fans liked it a lot. Then, the operators added the caption “Rally Monkey” over the clip. The Angels managed to snag a win, the fans enjoyed the clip, and the legend was born.

The popularity of the Rally Monkey was such that the team had to hire a real monkey to do the clips for them. Katie was given the role (she also starred in Friends). Since then, she would appear in videos dancing to the pop song “Jump Around” when the Angels were losing. Sometimes, she would carry a sign saying “Rally Time!”.

See it in action here:


And then, in 2002, a miracle happened. In the 6th game of the 2002 World Series against the San Francisco Giants (again!), the Angels were again behind with 2-3. If they lost, they would be eliminated. Even worse, they were down 5-0 in the seventh inning. Then the Monkey appeared, and the crowd went wild. They won the game and eventually the whole championship!

Take a look at this momentous game here:


The rally monkey has recently become more popular as the team managed to snag a spot in the post-season competitions. 2016, for example, has been dubbed as “The Year of the Rally Monkey”.

The fans can now buy their own plush figures and t-shirts to help the Angels win. But we like to think they can win with their skills, and not by sheer luck!

All this has created a perverse incentive among some of the fans. They wouldn’t like if the Anaheim were ahead, since that meant that they wouldn’t see the monkey! Ridiculous! That’s why some players actively dislike the Monkey. Rally monkey also isn’t a real mascot, so there is no real interaction between the fans and the mascot. Additionally, the clip that are used have been mostly the same for the last couple of years.

We would like to see the Rally Monkey turn into a real-life mascot and we’re sure the fans would appreciate it!