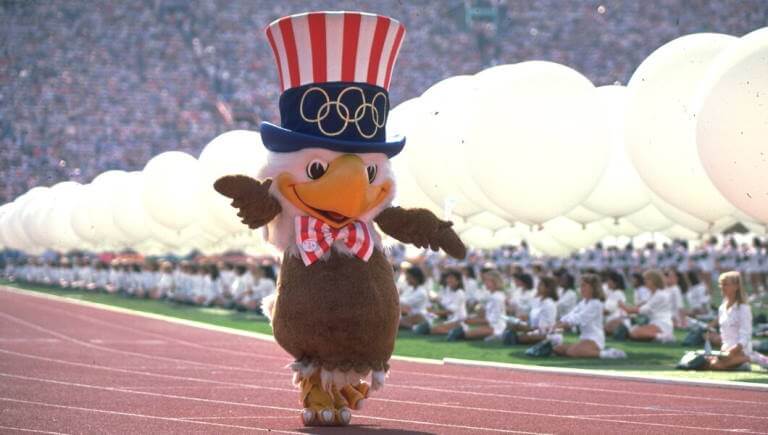 Mascots have always been an integral part of sports culture. Even though they are actually non-essential for the Olympics themselves, they provide a great image and marketing boost for the organizers, so they spend a lot of time and money for their development.

The first Olympic mascot was introduced at the 1968 Winter Olympics held in Grenoble, France. The event sported an (unofficial) mascot in the form of a skier named Schuss. The first mascot of the Summer Olympics, which was also the first official one, was introduced four years later in Munich. 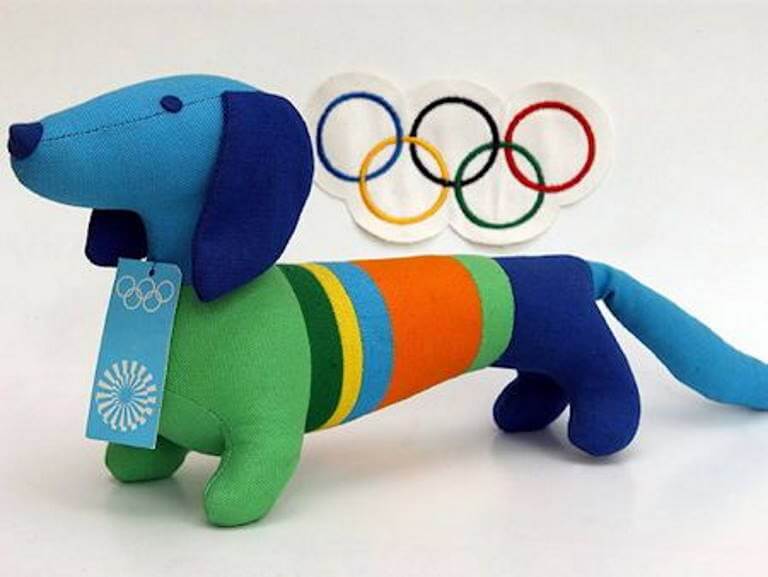 Waldi was a long-haired Dachshund modeled after a real-world dog. He was a success with the audience, and eventually all Games, whether Summer or Winter, had their own mascot.

Today, mascots have a dual function. They serve as an ‘ambassador’ of the event, by giving it a visual theme and distinctiveness. They are used in all official communications and commercials. However, they are also (or precisely because of that) designed so that they show an important detail of the host city or a country.

Therefore, the inspiration for most mascots comes from national cultural heritage or natural wonders that the organizers would like the world to see. Often, one can see heavy symbolism woven into the design of a mascot.

Of course, a well-designed and liked mascot also brings a host of financial benefits to the organizers, thanks to the sale of rights and merchandise. As a case in point, Vinicius, the Rio mascot, earned the organizers over $400 million from merchandise sales alone.

The decision on selecting the mascot lies on the National Olympic Committee of the host country. The World Olympic committee usually takes a hands-free approach on this matter. Sometimes, the National Committees opt for a public selection, while others choose a behind-closed-doors approach. This led to a large number of unique mascots that were often hit-or-miss, but most were well-received.

Selection of the most interesting mascots of the Summer Olympics:

Fuwa is the collective term for five official mascots of the 2008 Summer Olympics in Beijing. Translated from Chinese, fuwa means “good luck dolls”. They are also known as “The Friendlies”. Their names are Beibei, Jingjing, Huanhuan, Yingying and Nini. When read in sequence, they form a sentence that means “Beijing Welcomes You”. But that’s only scratching the surface of symbolism the Chinese adorned the mascots with. 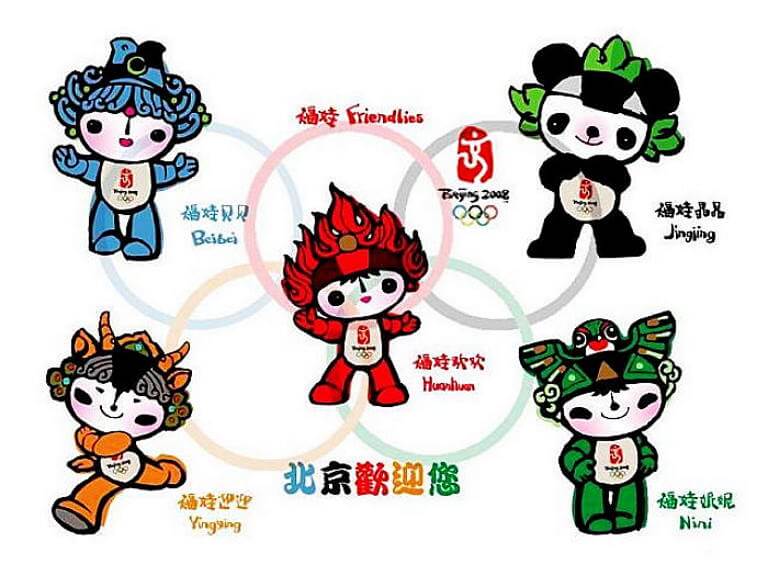 Han Meilin is the man behind the mascots. In line with fickle nature of artists, he has disowned the mascots after the Olympics. He drew more than a thousand models before settling on these characters.

During the design process of the mascots, Han had two heart attacks. China was also struck with floods, earthquakes and Tibet unrests. Superstitious people started calling these dolls wuwa (“witch dolls”), insinuating that they were cursed.

Beibei is a blue fish whose wavy hair introduces a motive typical of Chinese painting. Additionally, fish are a symbol of wealth in Chinese culture.

The black panda Jingjing is a bringer of good fortune. Flowers on his head were drawn according to the motives from Song dynasty ceramics. It is also a reminder of the importance of environmental conservation and peaceful coexistence with the natural world, since pandas are endangered animals.

Yingying, a Tibetan antelope, wears traditional Tibetan ethnic costumes with decorations typical of Western China. It is a symbol of good health.

Nini, a green swallow, is a symbol of the sky. It also resembles traditional Chinese kites. Swallows are also a sign of spring and happiness. The Chinese character for Nini also looks a lot like the old name of Beijing.

Huanhuan is inspired by the Olympic flame, with the design of the flames coming from Buddhist Mogao Grottoes.

Cobi is a cute Catalan sheepdog whose design is based on Picasso’s artistic style. He was designed in the cubist style characteristic of the painter. Why Picasso? He spent a few of his younger years in Barcelona, and considered it its favourite city. 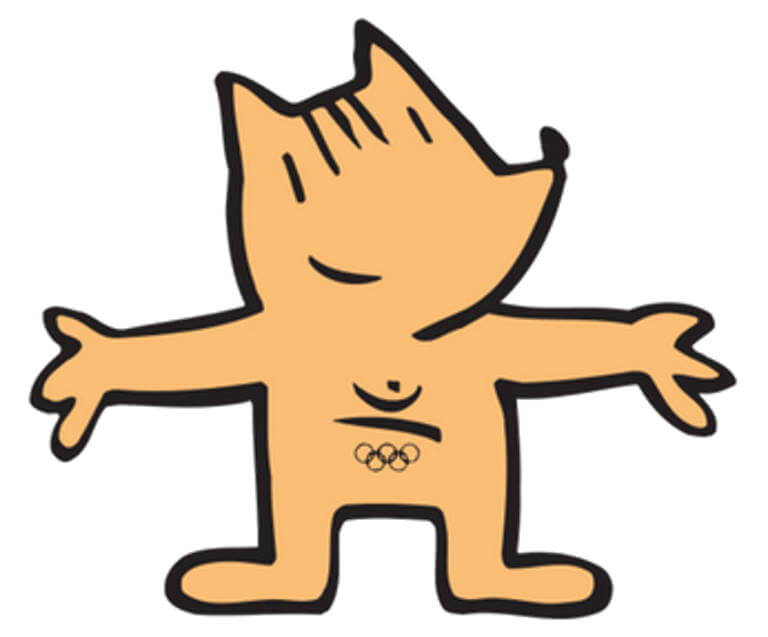 The name “Cobi” is itself an allusion to the ‘COOB’92’, a shorthand for the Organising Committee for the Barcelona Olmypics. The name was chosen for its simplicity. Even though at first Cobi faced a lukewarm reception at best, the audience grew to like him as the time passes.

Coby was designed by a Spanish artist and designer Javier Mariscal, whose proposal won (out of six chosen for deliberation). Cobi appeared on a large number of foodstuffs and other products – such as Coca Cola, and he even got his own cartoon which was syndicated all over the world. Reportedly, the organisers were more than pleased with revenue this cute dog brought them.

Izzy is one of the most infamous mascots around. The name of this mascot was chosen by kids; the original plan was for the mascot to be called “Whatizit”. Luckily, 32 American kids were asked to choose between five names: Kirby, Starz, Zack, Gleamer and Izzy. The list was compiled from the suggestions of over 3000 children from 16 countries. 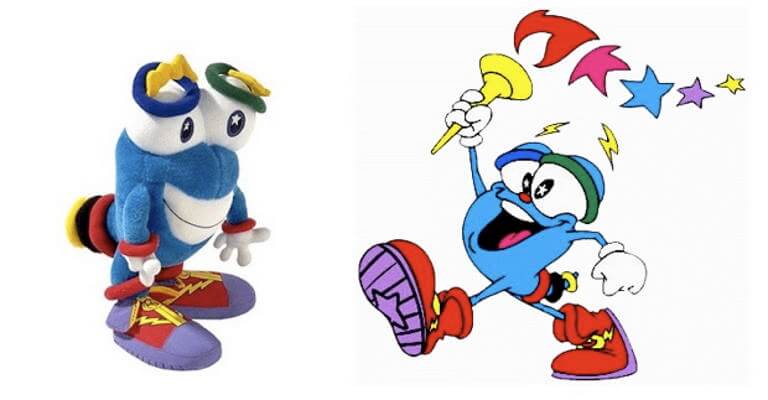 Izzy was in many aspects a step away from the tradition. It did not contain any of Atlanta’s landmarks of cultural symbols. It was the first fully computer-generated mascot. The designers changed plenty during the initial design process before they settled on one look. The organizers (proudly) stressed that Izzy was neither an animal, human, nor an object. Simply, they said, it was a wholly another creature.

The public didn’t take to that kindly. The mascot was called various unsavory names and regularly dragged through the mud in press. Even Matt Groening gave his two cents of disapproval. Most simply couldn’t get over the fact that none of Atlanta’s symbols were used, such as peaches, peanuts or a phoenix, the symbol of Atlanta. Children, however, quite liked it.

On the other hand, Blaze, a Paralympic mascot, still looks as good as ever:

No list would be complete without including the most recent mascot around. Of course, we’re talking about Vinicius and Tom (the Paralympic mascot). Vinicius got his name after one of Brazil’s greatest 20th century poets, Vinicius de Morales, while Tom is named after Antonio Carlos ‘Tom’ Jobim, a Brazilian musician and composer. The names were chosen by public survey. 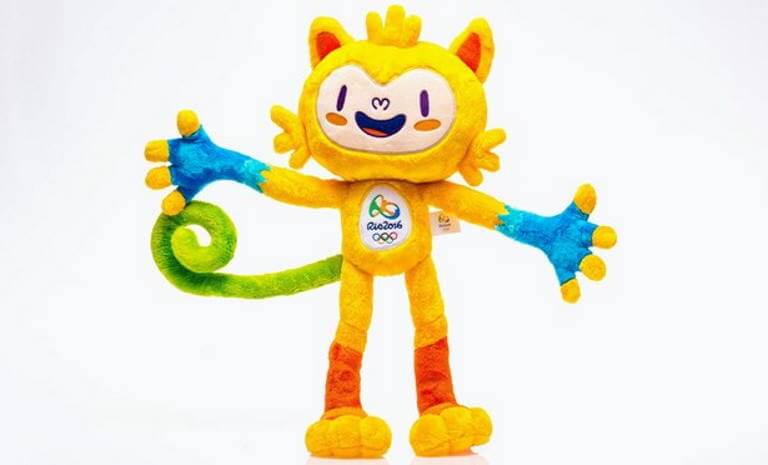 Mascots were selected via a public tender open to design and marketing experts. The organizers opted for showing the mascot designs they received to the best possible audience – children. Their comments helped them select the right mascot.

Vinicius was curiously used in the wrestling part of the competition. In wrestling, the coach has a right to challenge a referee’s decision, and he does it by throwing a soft object into the ring. For the 2016 Olympics, this soft object was a plush toy of Vinicius himself. Some liked the decision, but some coaches stated they felt silly holding a plush toy when their player’s success was on the line.

Vinicius takes after a plethora of Brazilian wild animals, while Tom resembles native Brazilian plants. The official origin story claims Vinicius and Tom arose from ‘the happiness of the Brazilian people’ after Rio had been chosen to host the Olympics. Even though he looks a tad strange, almost like a Pokemon, this mascot was universally liked, unlike Izzy.

He too got his cartoon, this time in the form of shorts that were aired on Cartoon Network. It goes without saying that loads of Vinicius-branded merchandise were made and subsequently sold not only to kids, but adults as well. But we understand. After all. Who wouldn’t want to have such a cute toy?

Is there anything that screams America better than a dangerous bald eagle? Of course not. The organizers of the 1994 Olympics thought likewise, so they chose to play it safe. The name is also a wise choice: ‘Uncle Sam’ being one of the most popular nicknames for America. Sam, the Olympic Eagle, also always wears a classic hat sporting the American flag. 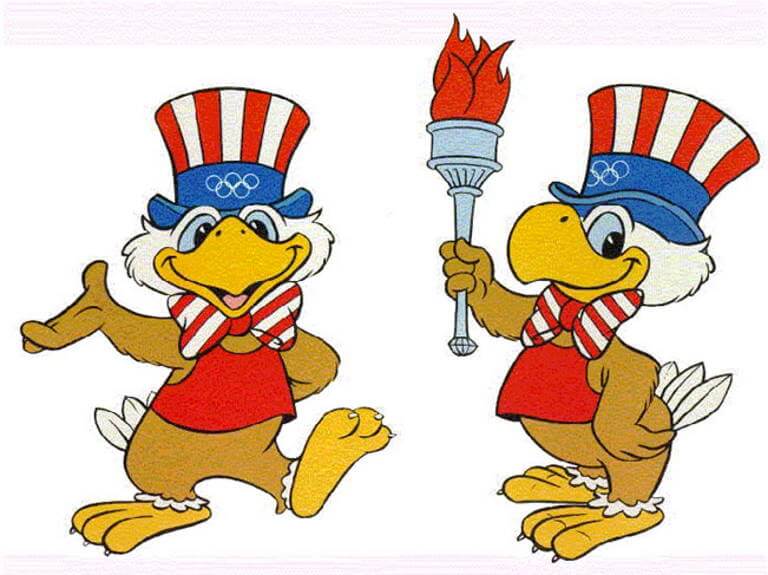 The designers were wise enough to make the eagle look non-threatening and friendly. Not an easy feat, considering how fearsome the animal is. Who’s responsible for the design job? You can’t go more American than Walt Disney, of course. The mascot is still being used for a few athletic events all over the US.

The initial idea was to use a bear as a mascot. Bear is the symbol of California, the state where Los Angeles is situated in. However, the idea was abandoned since Russia had already used a bear for its Olympics in Moscow. As if there’s anything more befitting of the Cold-war era than a bald eagle for a mascot!