Mascots, in general, are used to represent and organization, a company or a sports team. They are usually colorful characters – in every sense of the word – and they serve as a ‘spokesperson’ of sorts for the organization. A good mascot should embody everything a sports team stands for.

Some companies, believe it or not, have their mascots. Sony’s mascot, for example, is a cute cat Toro Inoue and he’s a well-liked persona. Or Michelin’s tire man – Bibendum. However, sports teams are what we most often associate with mascots. Not only sports mascots are what we see more often, but they were also invented by sports teams. Companies adopted them after recognizing the marketing potential they have.

Origin of the Name

Mascots in sports teams are sometimes objects of superstition. Fans often believe that a mascot brings good luck to the team. This view of a mascot as a good luck charm is corroborated by the etymology, that is, the origin of the term ‘mascot’. The word is of French origin – ‘mascotte’, which literally means – lucky charm.

The word was first seen in 1867 and was made popular by an eponymous opera. English adopted it near the end of the 19 century. At first, and originally, the word was used to signify a literal object thought to bring good luck, but then it began to signify such animals.

While mascots are now popular among a variety of organizations, sports teams were, in fact, the first who adopted them. It was the aim of the teams to entice people to buy tickets and come watch the games. However, it seems that, at first, mascots were a serious business.

At first, live animals were used. Some teams would bring real bears to the games. Luckily, this practice was abandoned, as these animals were often treated with cruelty and faced a very tiring life. Some of these animals weren’t even domesticated, and various (dangerous) incidents occurred. After that, teams would often resort just to having some sort of animal drawn and tacked on to their uniforms. Soon most wised up and began employing someone to get into a full-sized suit and actually interact with the fans on the field, but even today, most mascots are animal-themed.

Kids were also often employed, or at least, served as mascots. The first mention of something mascot-like can be found in The Dickson Baseball Dictionary. In 1880’s, a boy called ‘Chick’ was considered a luck charm by the fans – even though the was just a water boy. The New York Times was the first to use the word in its modern spelling; all earlier mentions went something like ‘mascotte’ or ‘mascott’. But none of these was a mascot in the modern sense of the word: that is, a person whose full time job is to perform.

The first sports mascot that can be considered a professional is likely Max Patkin, the venerable Clown Prince of Baseball. He was a legitimate baseball player in the minor league, but he wasn’t costumed when rooting for his teams. He performed for more than five decades as his alter ego. The first costumed mascot – and today one of the most famous – was Mr. Met, New York Mets’ official mascot.

Mascots are today very popular and all but very few teams have one, as least unofficially. Let’s not sugarcoat it – the goal has always been (and largely is today) to help the teams sell merchandise and popularize it. Emboldened by the success of the early mascots, pretty much every team has scrambled to create some kind of a mascot. Some are universally reviled, while some have been fan favorites for a long time.
The existence of the National Mascot Hall of Fame only shows the extent of the popularity of the mascots. Today most organizations dealing with the public have some sort of a mascot. Mascots are also created for one-time significant events, such as the Olympics or the Soccer World Cup.

Mascots aren’t only about entertainment nowadays, though. Most of the mascots today do a lot of work off the pitch. They often do charity appearances and visit hospitals, for example. Some teams make extra money by charging for birthday or company event appearances. But that doesn’t have to be bad. After all, mascots are the ambassadors for the team.

Mascots are a huge business these days, but it appears the fans don’t mind. They like the (staged) quarrels between mascots and sometimes their implausible origin stories – and why not; it’s all good fun. 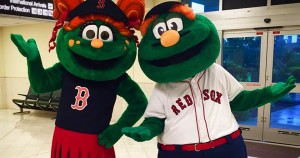 Tessie & Wally - MLB Boston Red Sox Mascots The fantastic duo consisting of Wally and his sister Tessie the Green Monster are responsible for cheering for the team and entertaining the crowd at the Fenway Park.   The mascots got their names after the famous left wall at Fenway Park, ...
Read More 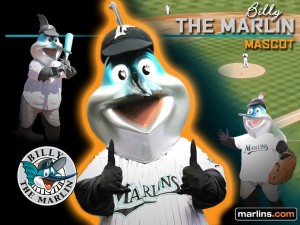 Billy the Marlin - MLB Miami Marlins Mascot Billy the Marin is the official mascot of the Miami Marlins baseball team. Even though he’s a fish, he has apparently learned to breathe the warm summer Miami air through his gills, and grew two pairs of limbs to interact with the ...
Read More 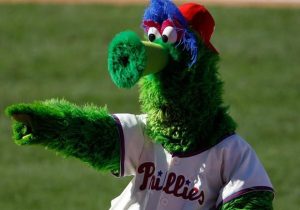 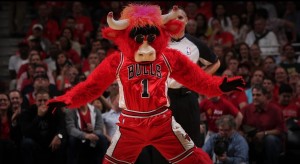 Benny the Bull - NBA Chicago Bulls Mascot The Chicago Bulls have one of the longest-lived sports mascots around. His name is Benny the Bull, and he’s a lovely red bull (duh) that’s been with us since we landed on the moon – yes, since 1969, making him the first ...
Read More 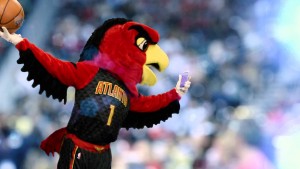 Atlanta Hawks Mascot – Harry the Hawk The Atlanta Hawks’ official mascot, Harry the Hawk, is popular with lots of Hawks fans. To an outsider, he can look like an ordinary mascot, but those in-the-know will tell you different. Back in the day when many of the teams’ mascots didn’t ...
Read More

Working as a Mascot?

Getting a job as a mascot could be easier than you think. Minor league teams often look for someone to fill the costume (literally), however the pros take the whole deal seriously. All the stunts that the mascots must do demand a lot of athletic prowess.

The costumes are also very heavy. Some mascots have reported that they sweat out so much that they lose over 10 pounds per single game! If that’s not dedication, then we don’t know what is.

The sheer number of appearances they must do is also staggering, in some cases over 1000 per year. That’s a lot of travelling and a lot of overtime. A man behind the mask really needs to be extremely dedicated to his team; the job is not for the faint of heart, and the salaries don’t make up for much. The range is very wide, but not many earn over $100,000 a year. A paltry sum for so much work!

Think from time to time about the folks inside the masks. They do their best to provide a glimpse of the fantasy world that adults often cannot experience anymore – except when watching the game on the field! That has to be worth something.