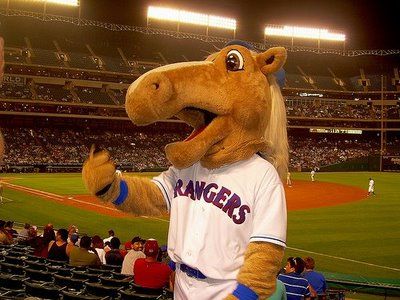 In line with the conservative style of many Texans, the Rangers decided to hold off on introducing a mascot until 2002, when a cute equine mascot called Rangers Captain was presented to the fans.

The Captain wears a jersey with number 72, as a reference to the team year then the team moved to the Dallas Metropolitan Area from Washington D.C. The mascot is always in sync with the team uniforms. He wears the exact same variant as his teammates.

The introduction ceremony was a sight to behold. The mascot was introduced at the Ballpark in Arlington, where he was officially sworn in by the then-major Elzie Odom.

Rangers Captain is designed after a palomino horse, with a western-style uniform. Now you might ask yourselves, why the name? Well, everybody remembers the Texas Rangers (hint: Chuck Norris). The historical name of the team leader was ‘the Captain’.

His official residence during the games is in the Ballpark’s tunnel, located behind the home plate. The average game day is hectic. He visits his fan in the seats, signs autographs in the Kids Zone (during the 5th inning) and runs with a huge flag after every win! Being a purveyor of all things cowboy, his go-to song is Cotton Eyed Joe.

Despite his jolly behavior, he’s still considered quite creepy by many. After all, it’s a literal human with a horse head – the stuff nightmares are made of. We don’t share this opinion, but to each their own.

If you’re a guest visitor, you must see this before you visit:

Unlike with many other mascots whose teams keep the performer names private, the Texas Rangers were very kind and released his name as soon as the mascot was introduced: His name is Walter Dootson, and he was only 18 when he started performing as a mascot 15 years ago (though even then he had some experience). Two years later, a performed named Jim Tennison assumed his position. The mascot gained height in the process, as Jim is a bit taller than Walter.

The Captain said his favorite memory was striking out Alex Rodrigues to advance to the first ever World Series in the history of the team.

The mascot can be booked for private events at the official website for $200 an hour, with discounts for non-profit events. He makes lots of appearances in the community every year, and along with the regular home games, it’s quite a job to have.

Even though he’s young, it doesn’t mean the mascot isn’t great. Quite the contrary. The experience for all fans is top-notch, with particular attention paid to the youngest fans. The job isn’t easy, but Ranger Captain does it with huge dedication. If you’re still on the fence about the Captain, it’s time to get off your high horse and go see a game! You’ll be thanking us later.