St Louis Cardinals are one of the most successful baseball teams of all time. Established in 1882 as the Brown Stockings, the team has a long history of great games and lots of excitement. 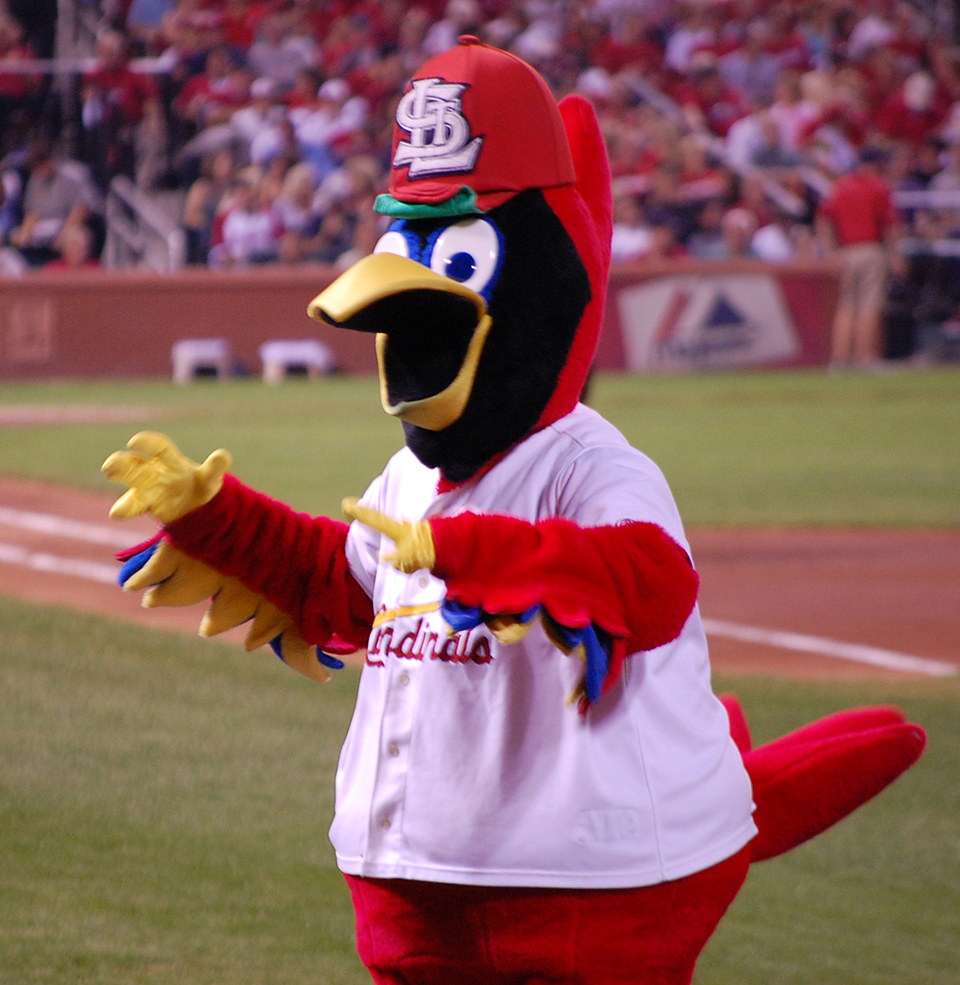 The team introduced its first and only official mascot to date in 1979. It was in April 6 of that year then Fredbird hatched. He is an anthropomorphic cardinal – it’s obvious why, isn’t it? He’s dressed in team colors, and his red feathers with black head are instantly recognizable. He actually looks like a real cardinal bird (cardinalis cardinalis), native to North America.

Firebird is accompanied by a team of jolly lasses who entertain younger, as well as older fans along with him. They were introduced in 1995 and became an instant hit with fans. He is often the object of envy because he’s so close to these girls -and who would blame them! Check them out:

Fredbird loves being in the crowd and entertaining his fans. He has a thing for popcorn, sodas and hotdogs as well (we all do, don’t we!). He enjoys dancing on the dugout between the innings, and he is officially the lifelong mascot of the Cardinals. Unlike many other teams, Cardinals haven’t replaced their mascot and don’t intend to do so.

Fredbird can be booked for private events at a cost of $350 for an hour. His Team Firebird can also be booked. They all do plenty of events during the season – promotions, publicity and private events.

Reportedly, Fredbird cannot fly. For that reason, he drives around the stadium with his ATV. Bored fans are often victims of ‘beaking’, while those lucky enough get to catch T-shirts he throws into the stands. Whenever the Cardinals win, Firebird grabs a team flag and waves it around the pitch. Talk about dedication!

Fredbird also appears on TV in a Cardinals show aimed at children.

But Firebird is not the only fan favorite the Cardinals have. There’s also another one – this time a real animal. His name is Rally Squirrel.

The nimble little creature surprised the crowds in 2011 when the Cardinals were playing against the Philadelphia Phillies. He ran through the field and interrupted the game. He did it again the next day and confused a few players. A squirrel arrived once more in 2015, but it is unclear whether it’s the same one.

Be that as it may, the squirrel attracted a large following, as the fans believed the squirrel brought good luck. It even appeared on a Topps card in 2012. The squirrel was captured by the wildlife service and eventually released. The squirrel fad fell into obscurity as quickly as it rose to popularity.

Take a look at the brave squirrel here:

The cool bird is here to stay for many decades to come, if history is to be believed. Why change him since both the attendance and the results have been so good?