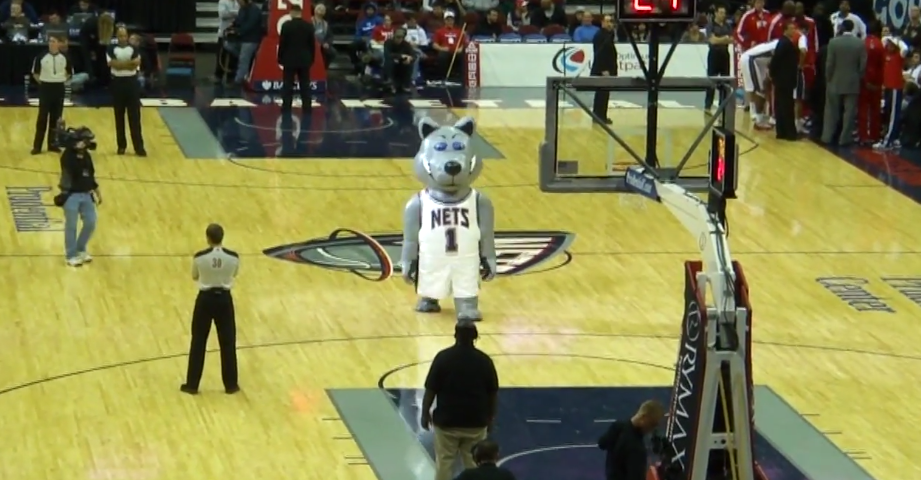 Much like the very diverse and colorful borough of NYC the team hails from, the mascots that this team had are also very interesting and very different from one another, each with its own creative direction and reasons for introduction. We’ll make our way from the oldest to the newest, and it’s a thrilling ride!

What is the Brooklyn Nets Mascot?

Prior to their move to Brooklyn, the team was situated right across the Hudson river, in New Jersey. The team’s first mascot back then was a human-like dragon transparently named Duncan the Dragon.

The dragon was supposedly introduced after the team management reportedly contemplated changing the name of the Nets to New Jersey Swamp Dragons. The idea had been proposed in the first place due to disappointingly low attendance and merchandise sales figures. The thought was that animated cartoon dragon logos would appeal more to kids than the rather unoriginal and meaningless ‘Nets’ name.

Half a million dollars was spent on changing the team name, logos and likeness. However, the idea for the name was eventually dropped and what resulted was a half-measure of sorts. The term ‘swamp’ was just too harsh and unpleasant for the local government to get over (even though the location where the Nets played has been, in fact, a swamp). In the end, all NBA teams but the NETS approved the change. The Nets’ director, Mr. Gerstein, voted against the change, feeling it was inappropriate.

The 1997-98 season saw a change in mascots. Duncan was sacked and Sly the Silver Fox took his place. The mascot had a catchy name and was quite entertaining to watch. That’s why he lasted until the team moved out of New Jersey in 2012.

The move to Brooklyn was marked by the introduction of a new superhero mascot. His name was BrooklyKnight, a play on words on the ‘Brooklynite’ demonym. He was introduced as a superhero who came ‘to defend Brooklyn’. He first appeared on Nov 3, 2012 in a game against the Toronto Raptors, where he made an exhibition shot before the game began.

And he did have strong credentials: he has been designed by Marvel, ABC and ESPN. The mascot also got his own comic book called BrooklyKnight #1, which gives the character a backstory.

Still, the mascot is considered somewhat of a failure for the team despite expending a great amount of resources (both time and money). But he did serve his function as a great way to mark the introduction of the team to the most diverse NYC borough.

He was retired for the 2014-15 season since he just didn’t work out. It all looked fine on paper, but the execution was apparently lacking.

Sly the Silver Fox in action

We hope the Nets will be able to reinvent themselves and find a mascot that will be a great fit for the team. They’ve been though their share of identity crises and it’s time to put that to an end.