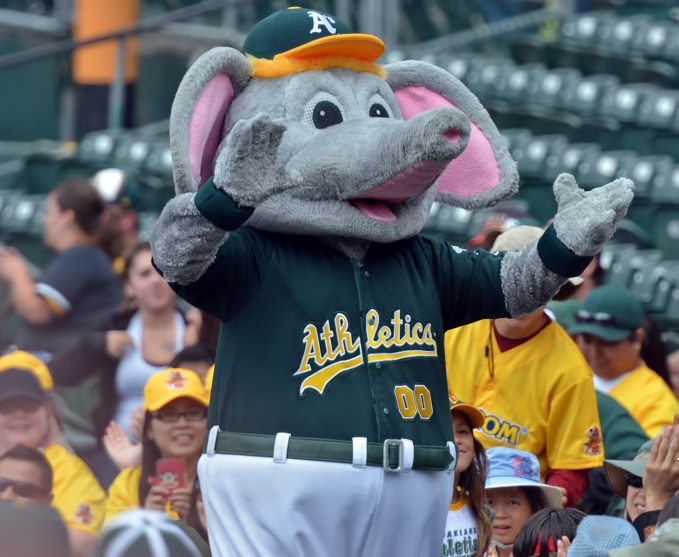 The story of an elephant mascot of Oakland Athletics is quite long and convoluted. But it’s a story worth telling, as they all are in the world of mascots.

Unlike many mascots whose names and likeness takes after an animal native to the area, or perhaps stemming from the name of the team, we assure you that elephants don’t live in Oakland – at least not yet.

See, Stomper is actually the product of a grudge. Stomper was introduced on April 2, 1997, but the elephant has been with the A’s for over a century.

It was in 1901 when Benjamin Shibe, a Philadelphia sporting goods manufacturer and business-owner, bought a controlling stake in the then Philadelphia Athletics. He did not shy away from investing pretty coin into improving the team – usually by ‘stealing’ top players from other teams.

Naturally, Shibe was met with resistance and derision, but aside from spewing insults there was nothing the other teams could do. And spew they did! The New York Giants manager, John McGraw, in response to the buyout of top players, weighed in on the team by stating that Shibe had a “white elephant on his hands”. A white elephant, as you may know, is something which is expensive to maintain but useless and troublesome.

The Athletics’ manager, Connie Mack, did not take kindly to such accusations and, in an act of defiance, decided to slap a white elephant logo all over his team’s uniforms. Four years later, in 1905, he went so far as to give a white elephant stuffed toy to John McGraw (the two were good friends off the field).

As the ownership of the Shibes’ became diluted and the team moved to Kansas City, the change in ownership brought about a change in the mascot. The new owner Charlie Finley introduced a new mascot – Charlie O., a Missouri mule. The theory goes that the elephant was replaced due to its association with the GOP, while the Kansas area was mostly Democrat at that time.

This act of political correctness received a lukewarm reception among the fans, who didn’t really take to Charlie O. The mascot lived through the move to Oakland in 1968, but the team was without a mascot again in 1976.

The team would have to wait for 21 years before the new old mascot was introduced under ownership of the Haas family. The elephant was chosen as a not to the olden days. Today, Stomper wears the number 00 uniform and an elephant still appears on the other player uniforms.

The business-like nature of the current owners was maybe taken too far. See, you can pay $50 in order to get Stomper to appear at your seat during the game. You also get an autographed baseball. While we appreciate the intentions, we feel it goes against the whole spirit of mascots – they should mingle freely with the fans, shouldn’t they?

Yet, in spite of his very threatening name, Stomper is anything but. He’s a happy-looking elephant that kids can’t wait to see during the games. Who would’ve thought that such a lovely, cartoonish mascot could have such a history? Well, anything’s possible in the world of mascots, and this is no exception.