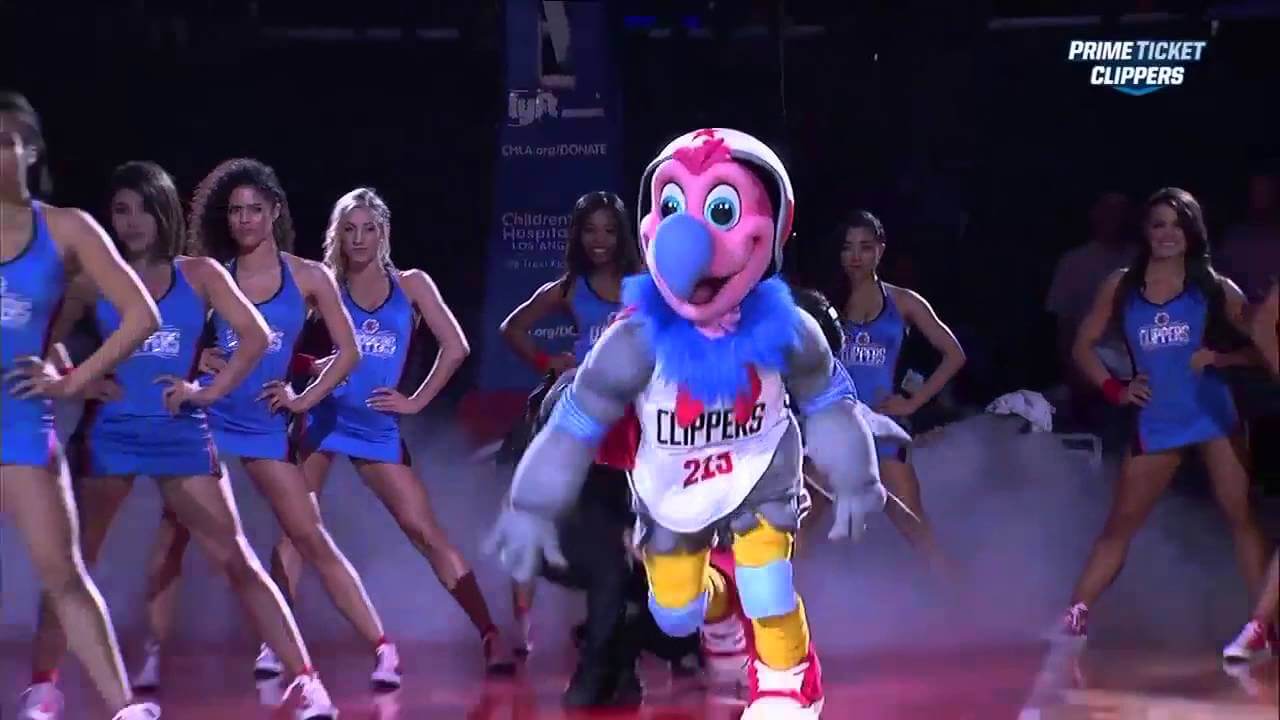 The new Los Angeles Clippers mascot was introduced on February 29, 2016 in a game against the Brooklyn Nets. The mascot’s name is Chuck, and he is a condor – or some kind of a superhero condor. He’s the new kid on the block. A super-condor? You could say that.

He was introduced at Staples Center by the team owner Steve Ballmer, of Microsoft fame. The man himself dunked (!) with help of a trampoline during the ceremony. If that’s how the man likes to spend his golden years, all we can say is ‘Amazing’!

The mascot got his name after the legendary basketball player Chuck Taylor – and during the intro ceremony, each fan got a free pair of Chucks!

The mascot wears a jersey with number 213 – the local area code. Sadly, Chuck doesn’t seem to have much of a fashion sense. It looks haphazardly designed and the face is neither here nor there – it’s not aggressive enough and it just looks sort of dumb. The pink face with a blue nose isn’t really bird-like. We certainly see why there’s been plenty of criticism. We feel the helmet also doesn’t do him justice.

The official bio lists some of the condor’s main features – including, and now hear us out, ‘remarkably graceful movements’. Does this mascot look like it can do graceful? It doesn’t… but you’d be wrong. He’s capable of more than you think!

On a more serious note, the choice of a condor wasn’t arbitrary. Say what you want about its looks, but it does raise awareness about this bird. Condors are critically endangered and integral to history of California. It is frequently featured in Native American art – probably thanks to its huge and imposing wingspan.

Still – the Clippers themselves don’t really have much to do with condors. Perhaps a paperclip would have fared better!

Unfortunately for Ballmer, Chuck turned out to be widely reviled among the fans. Even Kanye West gave his two cents on the issue, offering to help redesign him. We feel the mascot would definitely bear his likeness, so it’s a wash really. Kanye did get invited to a beer with Steve, probably because a public rejection would bruise his overinflated ego.

But apparently, Chuck is still here and the fans have at least learned to live with it, but we feel plenty more have started liking this cute, outlandish creature. And who wouldn’t? He is always goofy and active during the games.

It’s nice to see the LA Clippers finally having a mascot. Yes, maybe he’s not the most handsome avian around, but we’ve seen worse (we’re looking at you, Pierre the Pelican!). At least the team is passionate about it, and it’s nice to have someone entertain the kids during the games.