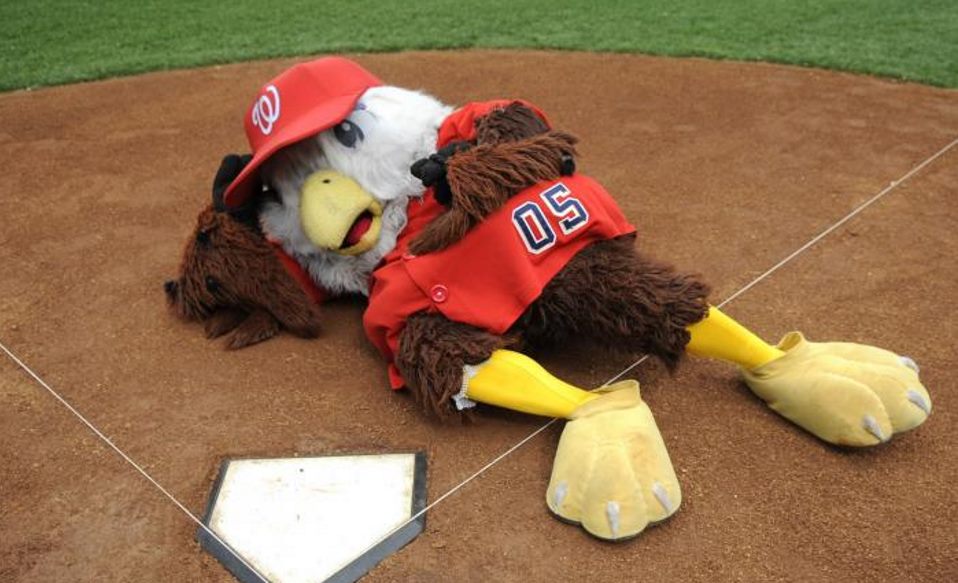 You can hardly have a mascot more apt for a baseball club based in the capital of the country than a bald eagle. Obviously the team also thought so and introduced Screech, a wide-eyed bald eagle in 2005.

2001 was a pivotal year for the Montreal Expos. The team was close to being dissolved after the MLB owners planned a contraction by two teams. The Montreal Expos and the Minnesota Twins were supposed to get the axe, but due to issues in revoking the Twins franchise and the collective bargaining agreement, both teams were left to play.

The team relocated to Washington, D.C. in 2005. This resulted in better news coverage and an appropriate stadium, which meant league contraction was no longer a threat.

In any case, the Nationals came to town guns blazing and introduced Screech on April 17, 2005 at RFK Memorial Stadium. Baseball was absent from the Washington area for 34 years before that day, and the fans sure were happy to see it return to the capital.

According to the official bio, Screech was found by the workers while they were working on the outfield of the stadium. They found this huge egg under the stands, which was examined by teams of trained zoologists. The egg finally hatched before the crows at RFK Stadium – apparently, this was just the push it needed. A huge bald eagle hatched – and the rest is history.

The eagle now lives at National Stadium, where the Nationals play their home games. He has a nest near the clubhouse. Screech has a white-feathered head with a plush yellow beak. At first, some commented it looked a lot more like a chicken than an eagle. It was subsequently redesigned in 2009 into a more mature look, but it got those huge eyes that make it look almost too threatening.

The mascot was designed by Glenda Guiterrez, a 9-year-old student, who drew her rendition of what the mascot should look like. Her drawing won for being the most similar to the new mascot.

Aside from Screech, the Washington Nationals hold a Presidents Race event every home game in the fourth inning. Five presidents participate in the race – four from Mt. Rushmore with the addition of William Howard Taft.

The predecessor to the Race were the Dollar Derby cartoons sponsored by PNC Bank, where three presidents from dollar bills would race, one of which always ended up last due to a humorous incident. The same principle applies for the live race – for example, Teddy couldn’t win for years due to absurd failures, played for comedic effect, of course. He managed to win on October 3, 2012, after 525 lost races. His long line of losses ever resulted in a fan website petition at LetTeddyWin.com, dedicated to, well, letting Teddy win.

Check out the new Screech:

It is obvious from the above that the Nationals really can make a good show. With a determined mascot and a great gag race, it’s no wonder their attendance numbers are so high. Oh and well, winning the title in 2016 didn’t hurt either. Good work!