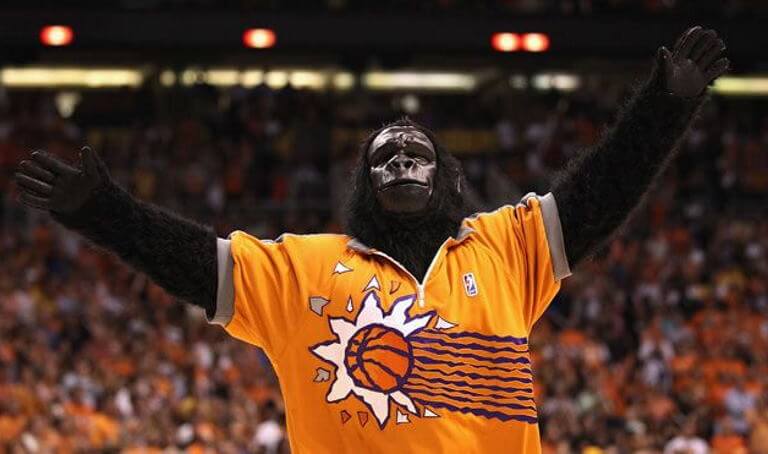 Phoenix Suns went without a mascot for over 10 years after the team was formed. Then finally, in 1980, something odd and a bit magical happened.

See, the Suns didn’t have any official plans for introducing a mascot, compared to how things go with other teams. Their first and only shot luckily failed. The management planned to introduce a sunflower-themed mascot, a play on the ‘Sun’ moniker in the name, which hasn’t proven popular, obviously.

The real mascot, the Gorilla, came to Phoenix by accident. A 23-year-old Henry Rojas worked for Eastern Onion, a singing telegram service. He was hired to deliver such a telegram to Veterans Memorial Coliseum.

Rojas was a fellow with a sense of humor, so he came into the stadium dressed as a huge gorilla. The usher had forgotten about him, and he sat in the stands hatching a plan to save face and escape gracefully.

However, a security guard suggested he stay during the halftime and dance for a bit at the court. The fans were thrilled by the performance – and so was Rojas. He managed a clean shot after the referee tossed him a ball, and the crowd roared in excitement. From that point onward, he would come to every home game and do his bit, even as an unofficial mascot.

It goes without saying that today such a stunt would be impossible, as security guards would jump the intruder as soon as he entered the court.

Check out a collection of his fantastic dunks here:

At first, the team’s PR managers didn’t like the stunt at all, but they couldn’t do anything to stop him. Over time, the team recognized his potential and over time invited him to become the official mascot. He wore an orange warmup jacket, the attire he’s known for even today. His pranks and jokes are one of the most legendary in the world of mascots.

Theme music from Rocky is a commonplace when he performs his routines, as well as his fantastic dunks before the 4th quarter. Rojas threw in the towel in 1998, and was succeeded by three other performers who managed to properly carry on in the same tradition. Bob Woolf donned the costume until the 2005-2006 season. Davin Nelson took over the helm afterwards, and he performed until 2012.

The gorilla is well-recognized even outside the US, having made plenty of appearances in Europe as well. As a testament to his fantastic career, he was inducted in the Mascot Hall of Fame in 2005.

The official bio claims he spends his holidays in the Banana Republic, but his favorite food is pizza… although banana-topped.

Many NBA experts and fans consider The Gorilla as one of the top mascots around, with the ESPN calling him “the Michael Jordan of mascots”. It’s not difficult to understand why. He is a truly ‘organic’, grass-roots mascot chosen by the fans and played by the guy who was passionate about it. And at the end of the day, that’s all that matters.