The Seattle Mariners are a host to a very joyful and lively mascot named the Mariner Moose. He is a lovely brown moose with a cute face and lovable eyes.

The Moose came about in 1990 after a statewide contest for children, where he beat a sea monster among more than 2500 entries. A fifth-grader Ammon Spiller from Bellingham suggested the Mariner Moose as a new mascot, and he received $1,000 as a prize. He stated that he chose the moose because they were funny and friendly, no matter the situation. We’re not up to snuff on animal behavior so we’ll take his words at face value. The moose first debuted on April 13, 1990 at the Kingdome.

When he’s performing, and that’s always during the home games, you can recognize him by the number #00 on his jersey, if the antlers aren’t forthcoming enough. No other player is allowed do use this number. He doesn’t frown on dressing up for special occasions, though:

He is known for running around the concourse, but his most telling habit is riding his ATV around the track. The Moose is so popular that the fans have picked up on his vocalizations. To express disapproval, usually of the opposing team, they imitate moose antlers with their hands and arms and yell “mooo” rather loudly. It’s a sight to behold.

In between the routines during the games, the Moose rests in his den called the Moose Room. The room has a nice couch, a fridge and of course a shower – these costumes are mighty hot.

It’s no wonder he needs rest considering the feats he performs – and the unfortunate accidents that sometimes occur.

But not everything is that dangerous:


Aside from being a great fan entertainer, he has become a symbol of the Northwest. Unfortunately, the identity of the man behind the costume is unknown. The Mariners don’t even alloy the Moose to talk when inside the costume. This is not due to fears that his cover would be blown, but to keep the magic going for as long as possible – we all would like to believe that this really is a moose! It makes sense, since the primary way most mascots communicate is by pantomime.

He has even run for president with Ken Griffey, Jr., a Marines outfielder. Admittedly, it was a Nike sponsored campaign, but that has to count for something in his CV.

The Moose runs a school program for elementary students called the D.R.E.A.M., which is a shorthand for “drug-free, respect yourself and others’, education, attitude and motivation”, which sums up nicely what it’s all about.

The Moose can be called to various events and parties, but the word on the street is that he’s expensive to hire, rumored at $600 per hour. Still, he makes hundreds of appearances for events, weddings and charity purposes.

The Moose is one of the cutest mascots we’ve seen and we’d like to see even more of him. Maybe we will if the Mariners manage to finally snag the World Series! 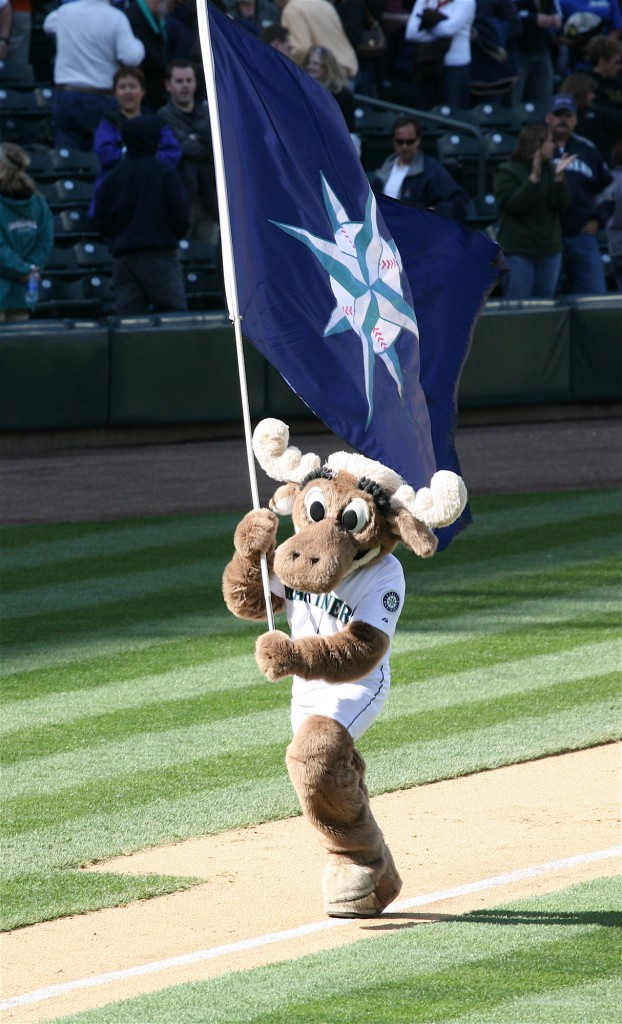